Olympics is undoubtedly one of the extraordinarysports events memorable for ages. Often displayed in a uniquely staged preparations and with mesmerizing scenes that have the power to conquer the hearts and minds of sports loving spectators. In fact, Olympic games are inevitably more than sports events.

When Ethiopian sportsmen and sportswomen dominate such prestigious global stages, the emotions offellow Ethiopians elate beyond enjoying winning races. That defines and dignifies their prides. Ethiopians are very well attached to athletics.

Tokyo in love with Abebe Bikila

The excitements of the Olympic Games often present great values for nations of the worldand Olympic has a great place for Ethiopians.Some Olympic events are tremendously worthwhile to be remembered. One of such events happens to be the history of one Ethiopian legendary long-distance runner who had his golden name written in the Olympic games. The athletics legend Abebe Bikila and Tokyo had a nearly60 years of special affairremaining well preserved and taught till these days.  For many Japanese, Ethiopia is wellknown as a birthplace of the great Abebe Bikila who won gold medal in a Marathon race at Tokyo Olympics. That’s the first thing comes to every Japanese mind when they talk about Ethiopia.

When on recalls history, Japan was still rebuilding from the erring devastations of the second world war (WWII) which blew it so heavily when it hosted the 1964 Olympics.While the war was edging to its end, Japan had to suffer fromatomic bombings by the US. As a result, most ofHiroshima and Nagasaki cities were destroyed and hundreds of thousands of lives perished. Many victims had agonizing experiences a lot many had lived through unspeakable circumstances due to exposures to nuclear radiations. There was a little of Japan left standing. Yet,less than 20 years after the end of the WWII, the southeast Asian nation was able to host the 1964 Olympics. It was a double surprise for many. Poor Japan and poor African was repeating history and winning gold again in the Olympics.

Four-year earlier before the Tokyo Olympics, Abebe being the first black African Olympic medalist was able to wina gold medal at 2:12:11.2. He won with a new world record in marathon race. His wining of gold medal overwhelmed the European audience for so many new things; a tiny yet a stronger black figure, representing a poor African nation, running on barefoot Abebe smashed the world long distance records at the 1960 Olympic Games in Rome. That story was once again reverberated when four years later, he won his second gold medalat 2:12.11. That was the decisive moment for Ethiopia to be attached to the heights of world athletics and Olympic Games. In fact, Ethiopia kept competing in the Olympic Games even before the Rome Olympics. Its first appearance was at the 1956 Summer Olympics in Melbourne, Australia. Back then, 12 sportsmenhad partaken in track and field events. 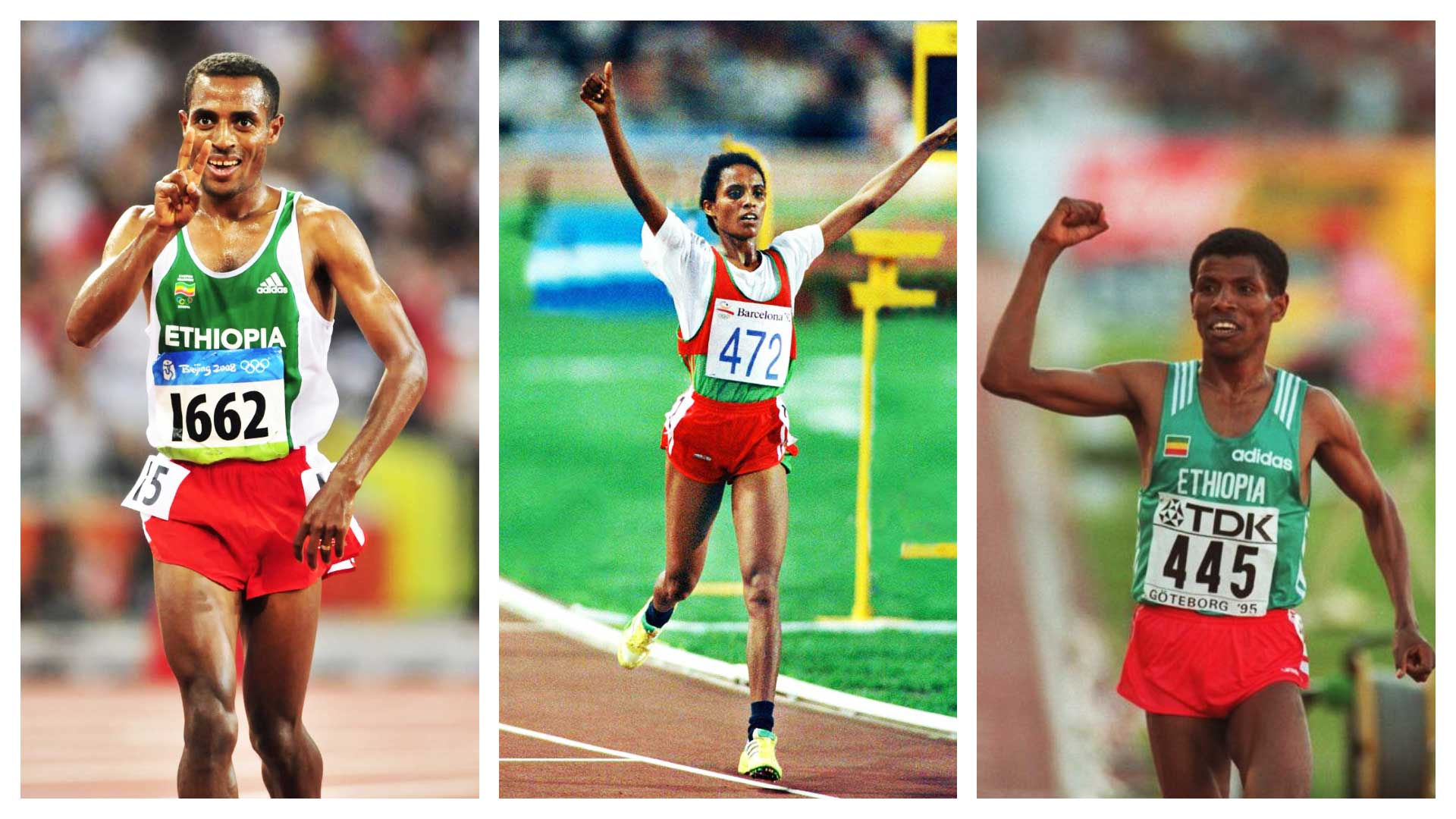 Throughout the initialinvolvement in Olympics, Ethiopia sentthe likes of Legesse Bayene, Mamo Wolde, HailuAbebe, NigussieRoba, BashieFeleke, GebreBirkay and Bekele Haile and BeyeneAyanoto compete in track sports. None were able to win a competition. Gradually, clinching in various Olympic Games with incredible performances many followed Abebe’sfootsteps and brought many prestigioustitles from Olympics and World Championships.

Scaling up the growth

Mamo Wolde, another legend of the Olympics, was able to win gold in marathon and silver in 10,000 meters in the 1968 Mexico Olympics and a bronze in marathon at the 1972 Munich Olympics. Later, in 1992, at the Barcelona Olympics, Derartu Tulu made history and was names the first African wining 10,ooo meters. Then comes the present-day legend Haile Gebreselassie, who wrote another remarkable history by smashing 27 world athletic records ranging from middle to long distance disciplines.

Ethiopia grew to become a significant weightlifter in the global athletics.It is to be recalled that Kenenisa Bekele was the second Ethiopian after MirutsYifter (“Yifter the Shifter”) to windouble gold medals in the 2008 Beijing Olympics running both the 10,000 and 5000 meters. Kenenisa was not alone to win double gold. The tigress  Tirunesh Dibaba joined the sprinter and won double gold medals in the same distance at the Beijing Olympics.

Nonetheless, the victories and vectors of Ethiopians seemingly appear to be giving in and their captivating and conquering wins are fading these days. Apart from having less of vigorous and valorous runners as opposed to the likes of  Abebe, Derartu, Haile or Kenenisa.

In fact,apart from the declining talents of athletes, the nature of athletics competitionis alsochanging,and the changes are criticized often for negatives. Many argue that the changes owe much of the blames for grooming individualized sportsmanship thancollective, team spirit  approaches.

According to Elshadai Negash, a sports analyst and CEO of KEM Corporate Consult, technological advancement is one of the contributing factorsmaking the Olympic Games to appear less captivating andtantalizing as they used to be. “Olympics is one of the best venues capable of bringingthe world community and families together. Nowadays, these values have been changing to individualism”,Elshadai told The Reporter Magazine.

Some claim that Ethiopia’s long-established athletics history is dying because some long-distance running tournaments are getting dropped out from the Olympic Games. For instance, the International Olympics Committee and the International Associations of Athletics Federation (IAAF) which has been rebranded to the World Athletics, have alreadyremoved 10,000 meters running disciplines from competitions. Due to this reason, many athletes are forced to focus on short distances and that impacted Ethiopia and perhaps the rival Kenya.

“As the Ethiopian runners prominent in the long race, many athletes are now focusing on short-distances.This is one of the reasonsenabling individualism in theOlympic Games”,Elshadai elaborates.

Despite declining sportsmanship and winning traditions, Ethiopia is once again preparing for the upcoming Tokyo Olympics. For 2020 Summer Olympics scheduled to take place from July 24 to August 9, 2020, Ethiopia will be participating in the athletics, boxing, and Taekwondo sports.

The Ethiopia Athletics Federation (EAF) has named athletes preparing for the Tokyo Olympics.In the meantime, the Ethiopian Olympics Committee (EOC) is alsopreparingto in several events to back the Olympics team. In collaboration with the Ethiopian Sports Commission and other governmental units, theEthiopianOlympicsCommittee is steering some programs aimed at lifting the spirits of the Olympics sportsmanship. The Committee has unveiled its plan to build an Olympics Village.

According to Ashebir Woldegiorgis(MD), president EOC, a three-billion-birr fundraising programs are set to be held and that includinggala dinner at the palace to be hosted by Prime Minister Abiy Ahmed (PhD). The Olympics village is said to be constructed on 110,000 square meters and will be built to accommodate multi-sporting events.

Apart from that, Abadula Gemeda,chairperson of the EOC  fundraising committee and former speaker of the  House of Peoples Representatives said that there will be plenty of activities that will helpexpand the creations of Olympics villages in many parts of the country.

While Ethiopia waits for the flinches of Tokyo Olympic games, its previous athletes are remembered for winning a total of 54 medals including 22 gold medals, 11 silver medals, and 21 bronze medals in the Olympics. Whether the 1964 history will be repeated at the upcoming 2020 Tokyo Olympics is what many Ethiopians are waiting for to see that coming.

The world seems falling apart as the immense threat from the corona virus pandemic becomes inescapable. Unprecedentedly, most nations are confined under in a total...

Scaling up the growth