He believes his lens has brought him an early recognition at a very young age. In the face of his unexpected accomplishment, the fortuitous lens master has received a highly celebrated prestigious global award for his photographic excellence. He aspires to elevate his profession further into the international showground and wants to tell more untold stories through his lens which gazes deep into the subject.

Born and raised in Addis Ababa, Mulugeta Ayene is a skilled photographer with growing and glowing experience in the field. After nine years of working in photography, a new dawn has bestowed light on his career. Mulugeta was nominated for multiple international best photographic awards by the World Press and was able to be named as the first prize winner under the spot news category. He was thrilled and surprised to be recognized by the distinguished organization globally.  He says at his early age and experience, the award means a lot not only for his achievement but for young fellows that desire to pursue the profession. Previously, he worked for a local newspaper before moving into foreign media and he works for the Associated Press as a regular photojournalist.

Mulugeta values his profession. He adores to express and share his emotions through the photographs he captures. The reason he was awarded for his mind-blowing photographs also links with his strong feelings. He has taken numerous moving photos at a Boeing airplane crash site. His momentous photos are full of touching feelings. He was able to capture those touching moments of the mourning families at the crash spot. His lens has zoomed in on relatives of the passengers that were on the plane during the terrible accident.

It is always to be remembered and commemorated in history that on March 10, 2020, Ethiopian Airlines Boeing 737 Max, flight number ET302 disappeared from radar just six minutes after take-off from Addis Ababa Bole International Airport. It was destined to fly to Nairobi before it crashed into a farm field, killing entirely 157 people on board.  It has been reported that the impact was so strong that both of the engines of the planes were forced to be buried some 10 meters deep in a cracked land. 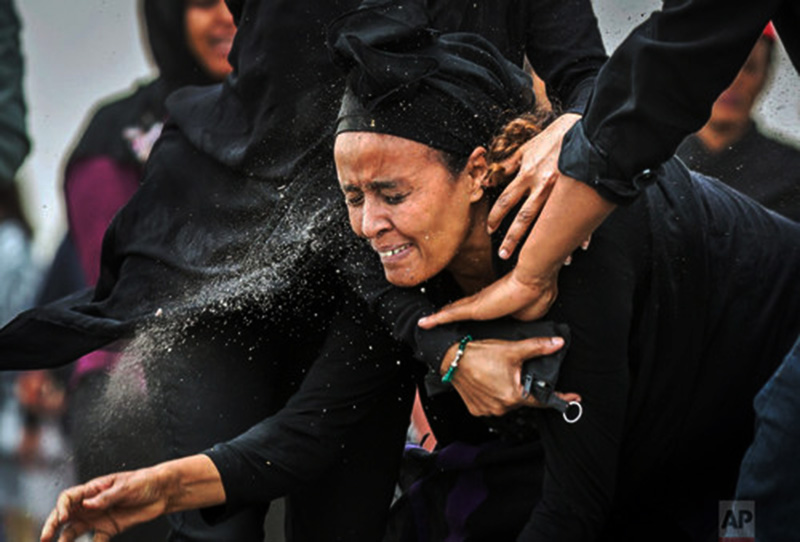 One of the relatives in his photos is seen dusting a palm-full of sand on her face while crying out loud so touchingly at the crash site is especially overwhelming. A couple kneels on the ground desperately wishing to pay tributes and farewell the bodies of the departed loved ones. Mulugeta was able to show that to the world in his photographs. These photographs have been overwhelmingly featured across major newspapers and mainstream media outlets. He helped the international community to witness the powerfulness of the accident and how the ill-fated aircraft has left unamendable scars in the lives of the living families.

A week after the accident, as victims were unable to be identified, empty caskets were buried on their behalf at the Holy Trinity Cathedral Church. That event was also overwhelming to witness.

Similar incidents have happened with an Indonesian Lion Air. A 737 Max aircraft crashed 12 minutes after take-off. Comparisons made and the causes for the crashes were technical failures that forced both aircraft to go down have severely damaged the reputation and business of Boeing Company.

Mulugeta says photography has a higher degree of expression than words could and he backs this statement with his journalistic experience. Back in the newsroom of Capital newspaper front-page stories are nothing without captivating photographs. “Back in the newsroom days, I was required to provide front-page photos. That shows how the press values influential photographs to tell their stories”, Mulugeta said. He describes how visualization helps grab readers’ attention. Stories that matter in the political, economic, and social lives of society are better explained through photographs than thousands of words, he argues.

According to Mulugeta, despite the impact and significance of photojournalism, the Ethiopian press has done little to cultivate and enrich that line of work. Africa, and Ethiopia in particular, have a lot of stories to tell the world. Unfortunately, the stories are recorded and told by foreign professionals and Mulugeta finds that painful.  “It is good that foreign photographers are coming. There are certain areas we could learn from them. But at the same time, we have enough talent here. We are able and good at telling our own stories. It is not appropriate for us to be told our own stories by others. That is how I feel”, Mulugeta insists.

If it was not for coronavirus, Mulugeta would now be visiting, networking, and exhibiting his works across 50 countries as part of his prize. Currently, apart from working for AP Mulugeta consults some UN agencies for photographic works. In addition to that, he takes part in activities at Addis Foto Fest, a regular photographic exhibition created by Aida Muluneh, another reputed and internationally recognized photographer who founded the platform for amateur and young practitioners to be able to tell their stories through visual arts. When invited, Mulugeta is involved in regional photo contests as a jury as well.

While waiting for the pandemic to go away, he spends most of his time at home and if one gets a chance to be at his home, Mulugeta knows how to cook. He has good taste.

Almaz Hailu (opted not to reveal her real name) has been working at a major four-star hotel in Addis Ababa until COVID-19 hit Ethiopia. “I...